Experience the best of the past in the Indiana Dunes

“Have you ever been on a farm?” It only took 10 minutes at the Broken Wagon Bison Farm for my friend Jess to ask me that question. After perfecting my lipstick and asking if we could call a bison over for a photo op, it was clear I had not. Yet, for as much as this city girl was out of her element on a bison farm in Northern Indiana, I was relishing every moment of it! While I am inexperienced in farm life, as a historian I love learning about and experiencing the past. This was the best part about visiting the Indiana Dunes—you don’t just read about or visit historical sites, you experience them.

It’s hard to imagine wild bison roaming the unclaimed lands that would eventually become Indiana. But before settlers almost wiped out these majestic creatures, they freely roamed nearly the entire North American continent. On the farm, we learned all about the history of the American bison (not buffalos… they’re only in Asia and Africa). Still passionate about saving bison, plucky farmers Wally and Bud educated us on the animals and their repopulation. While bottle-baby calf Daisy licked my boot and 1,600-pound Touch the Sky begged for more treats, Bud explained that by 1900, only about 1,000 bison remained from the estimated 70 million that once roamed the continent. Looking into Daisy’s big brown eyes, it’s hard to imagine that early European explorers and settlers slaughtered these temperate creatures en masse. 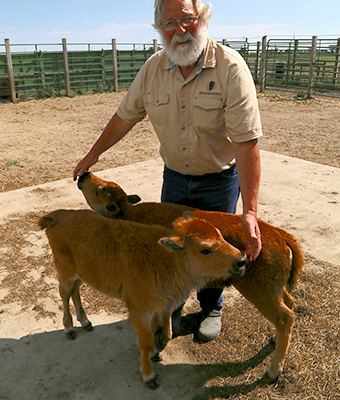 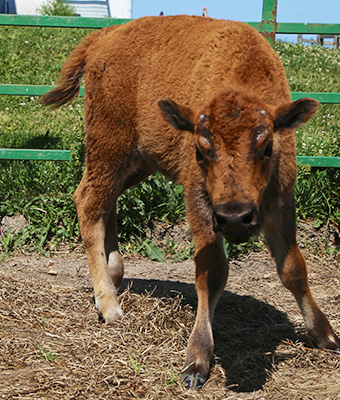 Time to explore some more history. Joseph Bailly was the first known non-native resident of the Indiana Dunes area. He set up a fur trading post in what would become the town of Porter, near the Indiana Dunes. After Jess and I befriended the bison, we headed to the site of Bailly’s original homestead. Life was not easy for early European settlers like Bailly, who settled in remote locations with no community or infrastructure. The chilly temperatures and outhouse would have been enough to make me throw in the towel! Despite being a pioneer in the wilderness, Bailly built a thriving trade business with the local Indian populations and travellers on their way even further west. When you visit the homestead you can see just how Bailly, his wife, and four daughters lived on the American frontier.

While Bailly was the first European settler to the Indiana Dunes area, he certainly would not be the last. Following the American Revolution, the Indiana territory would become home to thousands of Americans and immigrants migrating west.

The arrival of the railroad in 1852 and availability of land attracted an inrush of pioneers to Indiana between 1850 and 1890. Yet despite the rapid influx of settlers, life in Indiana was still difficult and consisted of a lot of hard work. For many Americans and immigrants, this lifestyle was worth it as the Indiana Dunes area promised new opportunities. Visiting the Chellberg farmstead let me step back in time to the 1800s and gave me a good idea of what it was like for hard-working immigrant families. I definitely don’t think I could have cut it. No indoor plumbing or electricity and waking before dawn? Nope. Kudos to the Chellbergs. 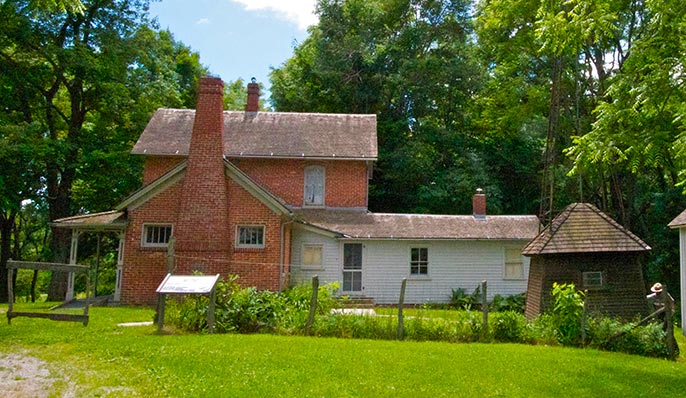 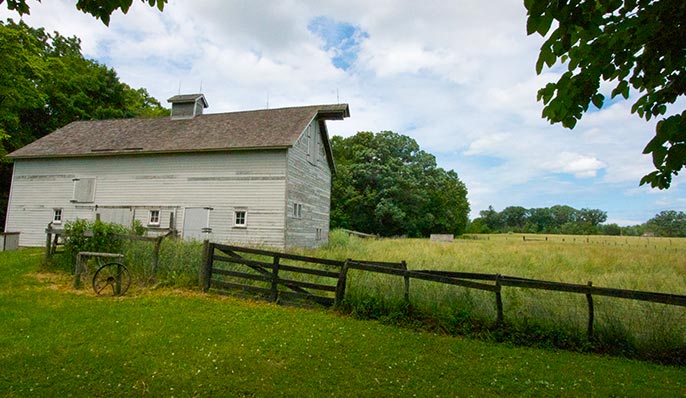 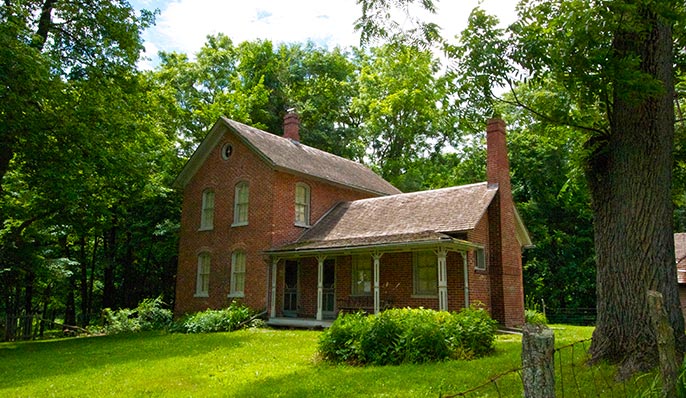 By the turn of the 20th century, the Indiana Dunes area was far from an isolated frontier. Five decades of mass migration and the arrival of industry, thanks to the railroad, ushered in a “century of progress.” Quintessential small towns such as Chesterton, Porter, and Valparaiso dotted the landscape. Expanding infrastructure and industry attracted many to the region, including numerous immigrants from Ireland, Germany, and Sweden. Today, the Porter County Museum in Valparaiso and the Westchester Township History Museum in Chesterton both boast living history that chronicles life in the region through settlement, The Civil War, Great Depression, WWI, and WWII. Each highlights notable local families from various periods and artifacts donated by residents through the years. While there, I really enjoyed learning about the history of the natural Dunes, the attempts to preserve them, and the marketing campaigns designed to make them a vacation destination. And I’ll always vividly remember rounding the corner of the Porter County Museum to unexpectedly find an enormous mastodon skull on display. The skull was discovered and dug up by a local farmer in 1949 and makes for a dramatic exhibit. 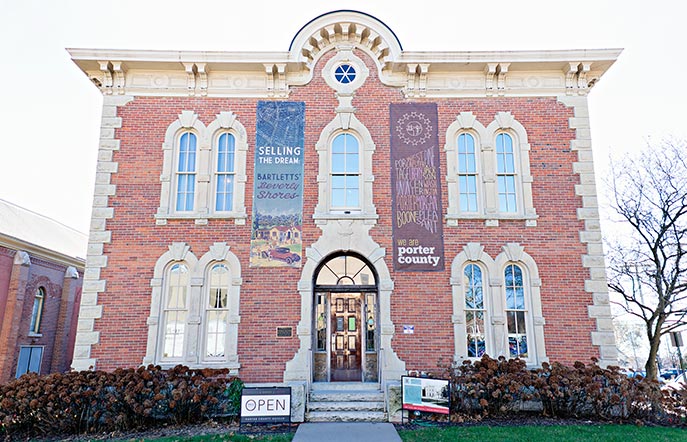 While the railroads brought prosperous industry to the region, these same industries threatened to ruin its unique and gorgeous ecology. The Indiana Dunes National Lakeshore was not formally created until 1966. But efforts to save the Dunes began in 1896 with Henry Cowles, a botanist from the University of Chicago. That was the year Henry first visited the Indiana Dunes and became captivated with its distinct ecology. Cowles’s efforts to study and preserve the Dunes ushered in almost a century of struggle between industry and preservation.

The steel mills and power plants might have threatened the local ecology, but they did not dissuade the tourists who had recently discovered the area. Thanks to the new South Shore Line (a modern commuter train that still operates today), built by Chicago tycoon Samuel Insull, elegant mahogany railcars ferried passengers along the shoreline in style. Insull also commissioned colorful posters, ads, and maps to lure Chicagoans to the lakeshore on weekends. And it worked; by the 1920s the Indiana Dunes were full of tourists enjoying water sports, beaches, and nature trails.

The glory days of the South Shore Line were cut short by the 1929 stock market crash. Yet, as Insull filed for bankruptcy, a new business magnate took interest in the Dunes. Robert Bartlett planned to build the perfect resort community on the shores. His planned community included roads, a school, a championship golf course, a botanical garden, a riding academy, and a Florentine revival hotel. He even relocated six homes from the 1933 World’s Fair in Chicago. These homes used the latest and greatest building materials and techniques and represented the future and prosperity of the region. While Bartlett’s idyllic community was initially a success, by 1947 he had to abandon the project for financial reasons. The community later incorporated and today you can still visit the historic Century of Progress homes. Obviously, I was particularly fond of the pink one, but each offers a different vision of progress and the American dream. Today these homes are privately owned but opened to the public for one day in October each year. 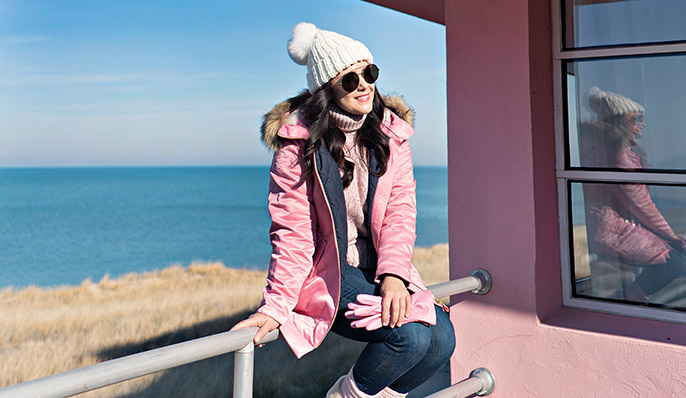 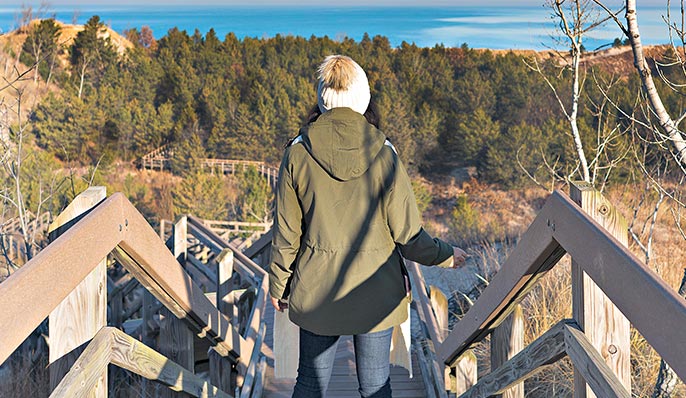 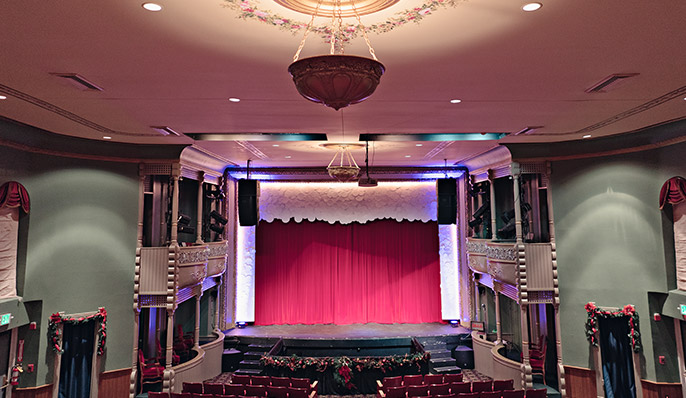 In addition to experiencing the history of the Indiana Dunes, Jess and I also enjoyed more of what makes the area spectacular: several of the gorgeous dune hikes (the Succession Trail in West Beach was our favorite), independent restaurants, and a special treat: a local production of A Christmas Story at the historic Porter County Memorial Opera House. Inside this gorgeous Civil War-era hall turned theater I gained a new appreciation for the classic story of a young boy growing up in 1940s Indiana pining for the perfect Christmas present, and I enjoyed the beautiful historic setting as well.

Indiana Dunes is famously popular in the summer, but as Jess and I quickly discovered, there is plenty of natural beauty, outdoor recreation, and history to experience all year long!